I went to visit Jamie and Debbie at the Street Food Collective earlier this week. The spent an hour talking to me about their business, their bao, their menu, their latest persimmon salad, their research trip to Hong Kong, their passion for creating next level vegetarian options and so much more. Judge Bao started over the summer at markets, now it has a more permanent home in Ponsonby. Next stop, their own restaurant.

Jamie: I am one part ADHD but I’m also two parts OCD. I have a crazy “I can’t stop” vibe. I’m happiest when I’ve got a challenge. I like that little bit nervous, “I’m under pressure” feeling! Then there’s Debbie who is the most structured and organised person in the the world. She pulls me back down to earth when I get overly excited and head in the clouds. But she goes into her own little world a lot and cannot hear when people are talking or calling her!

Both: Our day usally begins with I’d love to say gym, but that would be a lie. We tend to head to a nice quiet cafe, have a coffee and a bite. Then Jamie will call suppliers about products and try and source the not so easy to find Asian ingredients and work on menu ideas. Debbie puts the numbers down, looks into the accounts… she is the Excel whizz kid. She’ll contact her mum for tips on our dishes and questions about what province or style the dish is from. Our day ends with a high five after a kick ass busy night at The Street Food Collective. Shortly followed by dinner and the mad pack and clean down before heading back to our production kitchen to unload and stock take for the next day’s service. Then before bed a good cup of camomile to take off the service buzz.

Name your three favourite places in Auckland to eat, drink and play.
Debbie: I love Olaf’s bread and RAD’s coffee. Jamie and his old Depot lads like to meet up now and then, talk shop and head to The Fiddler for few beers.
When we play we both love a good movie at the cinemas and to play some Play Station. If we have a chance we take road trips and get out of the smog for some greenery and fresh air!

Tell us something we’d be surprised to know about you.
Jamie: I’m one of 8 kids – the middle one! So I have a severe case of middle child syndrome where I always need attention. I also eat really fast in case I don’t get seconds. Debbie has lived in Australia for twenty years and still can’t pronounce words right even though she is fluent in English. Sometimes I think she adds words to the dictionary… She loves drawing manga (Japanese comics), and has a nasty obsession with candy floss… the Cotton Candy Lover.

Pick a book and a park you’d like to read it in, anywhere in the world.
Debbie: I love manga, especially One Piece (not the swimwear ha ha!). My favorite place to read would probably be this little park outside my old house back in Melbourne. Jamie has always loved John Steinbeck’s Of Mice and Men, and his favourite place is in his home town Kent, by the local windmill which he is incredibly fond of. He even has a tattoo on his elbow about it!

Tell us about how and why Judge Bao came to be…
Jamie: I used to work a lot of nights at Depot, and after a busy service I’d come home shattered. Debbie would be waiting up for me and would cook me some awesome Chinese home cooking. It was all alien to me as I’d never experienced that type of Chinese food. I was really interested in how the style of cookery is almost another world away from all the European food I’ve cooked – the style of cutting, the braising techniques and the different repertoire of flavours. After a lot of talking and brainstorming, we took a two month trip to Hong Kong, ate, watched, researched and filled a dozen notepads with ideas and recipes. We started with a few markets before the trip to see if what we were doing was going to work. We were overwhelmed by how much people loved it. We were lucky enough to work alongside Miss Moonshines who have taken our little pop up under their wing and we are just flourishing.

What’s the secret to really great Bao?
Debbie: The true secret to our bao is my Ma who told us to keep it simple. Also a lot of trial and error. The most important ingredient as Al Brown always says is love! 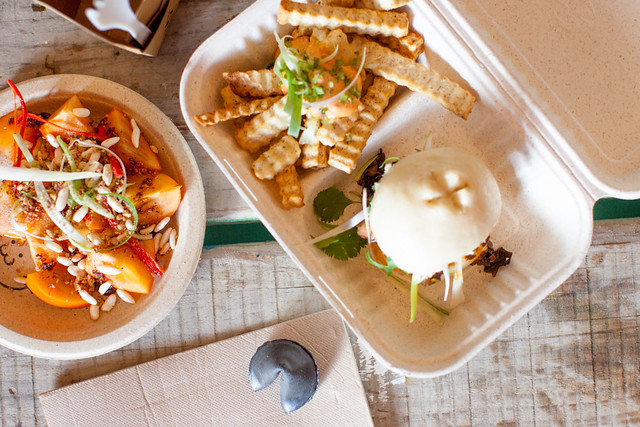 What are your plans for Judge Bao’s future?
Jamie: For the future we would like bustling 20 seat eatery where we make noodles, bao’s and family style Chinese food. Then an online store where we can sell our baos and other products. 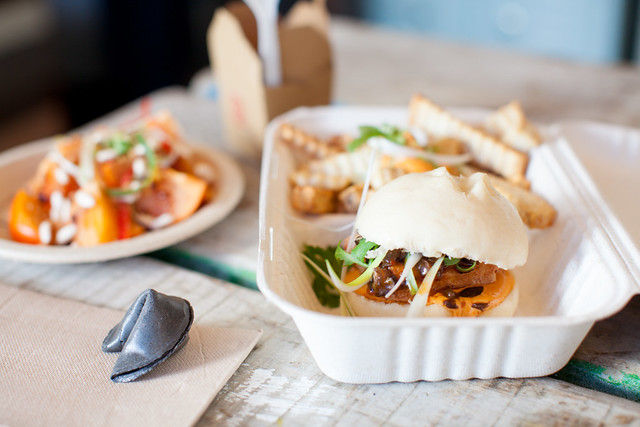 If everyone in the world had a theme song that played when they walked into a room, what would yours be and why?
Debbie: Jamie’s theme song would be “There is a light that never goes out” by The Smiths. He thinks it’s awesome and he’s always humming it. It’s the most depressing song in the world but he insists it’s lovely…
My theme song would likely be some Japanese amine (animation) theme song that I’d shamelessly belt out loud and singing half the lyrics wrongly!

You can try Judge Bao goodness at the Street Food Collective, just keep an eye on their website for the schedule.

Also, watch this great clip of Jamie and Debbie from Club Sandwich (there are other similarly cool videos on their page).