For the past few months, Auckland Art Gallery has been playing host to a beautiful exhibition called Light Show, which travelled here from Hayward Gallery in London. It’s sparkled and dazzled thousands of us, children and adults alike, with works from some of the best light artists in the world. On February 8th, it’s all over. February 3rd is the last Light Show open late, featuring one of Auckland’s own musical wonders, Chelsea Jade. If you haven’t been already (gogogo) then going along to this is a very good idea.

I’m a misanthropic tear jerk who cries in public but I’m also a song-maker, specialising in singing what I can’t bring myself to say.

My day usually begins with a murky idea of how to execute a creative endeavour and ends with the bleary eyed recognition that nothing you plan will turn out the way you thought, but at least it might turn out better.

Name your three favourite places in Auckland to eat, drink and play

EAT // I occasionally moonlight as a waitress at Clear Water Peak on Ponsonby Road. It’s almost like a passion project working there because the food is seriously exceptional. For the love of god, just get the gingerbread pancakes.

DRINK // I have enjoyed a tipple at Coco’s Cantina on more than one occasion. It’s got a ‘stay forever if you please’ vibe and some of the best service in the game. For the love of god, just get the meatballs.

PLAY // I’ve become quite partial to the comedy goings on at The Basement. Especially since the Snort crew let me crash their supremely fun Karaoke Xmas party. The events are usually criminally cheap relative to the laughter potential so it’s particularly effective when you’re feeling like an impoverished sad sack.

Tell us a story from Tokyo:
Here is a visual aid for a high tension moment manipulating sometimes inaudible but insanity inducing hums, with Eye of The Boredoms as chaos conductor (photo by Dan Wilton). It was like being at sea in a storm, with a huge audience around us, watching to see if we’d survive. The group felt galvanized after that. It was truly incredible. 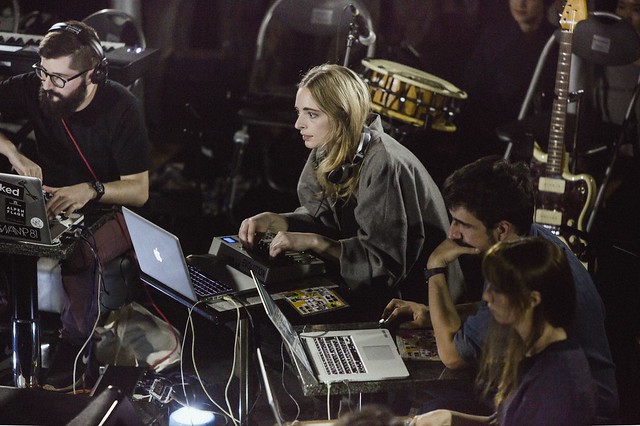 Tell us something we’d be surprised to know about you
I wrote a song to pitch to Rihanna this year.

Pick a book and a park you’d like to read it in, anywhere in the world.
I’ve been hosting something of a short story hotline for an overseas friend and the last phone call involved a recitation of Miranda July’s ‘It Was Romance’. Let me tell you, I could not keep it together. The pages are now puckered from hysterical lol tears and I need a do-over to reassert my professionalism. Therefore, I choose the Miranda July compendium ‘No one Belongs Here More Than You’ and if I can get away with it, the Strange Babes house in Echo PARK, Los Angeles.

What are your new years resolutions for 2015?
In the words of my Austrian friend Mimu Merz who is currently sleeping on my floor, I resolve to no longer surround myself with ‘minor spirits’. I also resolve to understand why I don’t like pasta.

Name three songs that were your soundtrack to 2014.

Angel Olsen – ‘Hi-Five’ / Oh, you’re going through a break up? Let Angel’s semi-detached voice sing for you. ‘Burn Your Fire For No Witness’ is the record you’ll need to get through the emotional brutality of the first two weeks.

Rhye – ‘Open’ / I’m a little late to the party on this one but sweet jesus, this song is like sliding into a bath drawn at exactly the right temperature.

Taylor Swift – ‘Blank Space’ / It’s no secret that I’m a Swift devotee + this song is home-run for me. The extended chorus? Yes. The aggressive self awareness? Very yes. ‘I get drunk on jealousy’? YES. Me too, Taylor. Me too.

If everyone in the world had a theme song that played when they entered the room, what would yours be and why?

‘This must be the place (naive melody)’ by Talking Heads.

Chelsea Jade is playing at the final Late Night at the Auckland Art Gallery, one of your last opportunities to see the spectacular Light Show before it leaves our shores for good. For only $20 you get to schmooze around Light Show late into the night, sipping on Epic Beer or Villa Maria wine and listening to George FM DJs. At some point, Chelsea Jade will appear in all her aggressive ethereal floatiness – if you’ve not seen her live before than can we just say that you should. GET TICKETS HERE.